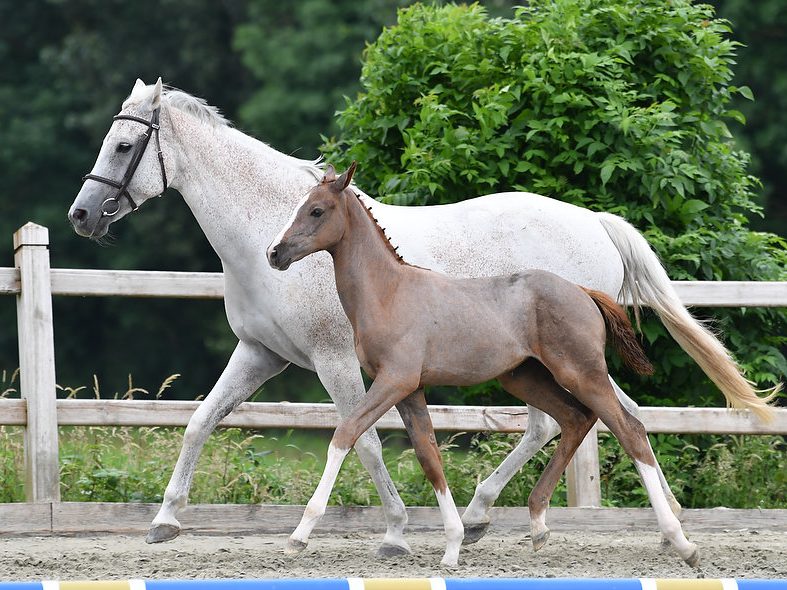 On several social media platforms, the discussion arises whether top sport mares breed better and more successful offspring than broodmares who have never competed in the sport themselves. We take a look at the top 20 horses in the Hippomundo Horses ranking and see whether their dams have competed.

Out of the top 20 most successful horses in the sport right now based on prize money, just four horses are a product of a dam that has competed in the sport herself, and only three from a dam that competed at the highest level (1.60m).

The third most successful horse of 2021 so far is Scuderia 1918 Tobago Z, a son of Tangelo vd de Zuuthoeve out of Whoopie C. Whoopie C is a mare by Mr Blue out of a mother by Feinschnitt I vd Richter and competed up to 1.60m level under Yves Vanderhasselt and Jonas Bellemans. Not only is she the mother of Tobago Z, she also produced 1.60m-jumper HH Donatella and 1.50m-jumper Beijing Z.

Fifth in Hippomundo’s Horses ranking of 2021 is Killer Queen VDM by Eldorado vd Zeshoek. Now, she has a motherline to die for. Not only her dam, but also her granddam AND great-granddam competed at the highest level of our sport. Killer Queen’s dam, Derly Chin de Muze by For Pleasure, has a multitude of top-eight placings to her name in four- and five-star Grand Prix under the saddle of Eric Lamaze and Sharn Wordley. She is also the dam of 1.60m-jumpers Japatero VDM, Kontador VDM and 1.50m-jumper Juju VDM. Derly Chin’s mother, Werly Chin de Muze, by Nabab de Reve was active at 1.60m-level under Richard Davenport. Werly Chin is the full sister to 1.60m-jumpers Merveille de Muze, Exquis Walnut de Muze and Walloon de Muze and aside from Derly Chin de Muze she also produced the top-level showjumpers Diablesse de Muze, Everychin de la Pomme and Kirschwasser SCF. Werly Chin’s dam, Qerly Chin by Chin Chin placed in several 1.60m competitions with Christophe Barbeau. Besides her previously mentioned offspring, she also produced Narcotique de Muze IV (1.50m), Narcotique de Muze II (1.60m) and Napoleon (1.55m).

The son of Chacco-Blue, Explosion W is currently ranked 16th in the world. His dam, Untouchable, by Baloubet du Rouet, competed at 1.60m level with Dutch rider Leon Thijssen, before going on to be successful in the Young Rider classes with Alma Björklund. Not only is Untouchable the dam of Explosion, she also produced 1.45m-jumper Boncetto W.

Finally, the fourth and last horse in the top 20 to have a mother that competed in the sport is Dominator 2000 Z. His dam, Cephale 2000 by Cassini I, competed up to 1.40m under the saddle of Belgian rider Kim Colaers. 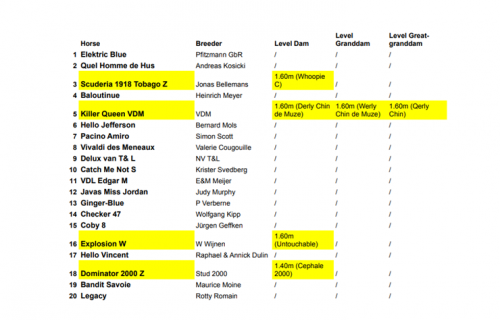 All in all, just 20% of the top 20 horses come from a mother who competed in the sport herself. However, with the increased availability of techniques such as ICSI and embryo transplants, it is becoming easier to breed from a mare without sacrificing her sports career. It will be interesting to see in ten year’s time what effect the increased use of these new and improved innovations will have on the future of sport horse breeding.

Nevertheless, it is hard to ignore the fact that breeding from a mare with an accomplished motherline of sport horses, without the mare herself ever having competed, does prove to be successful. In the following weeks, we will further discuss this observation by discovering the damlines of the current top sport horses at the time and find out how many 1.45m+ horses come from the same family.